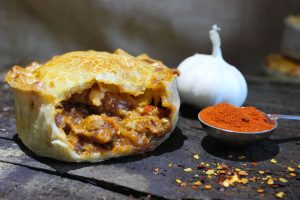 The Wilfreds range aims to target more upmarket suppliers and consumers and adds a superior array of products to the company’s offering as it targets a new business area.

The award-winning products have been produced with a strong emphasis on quality and locally-sourced ingredients from Welsh suppliers.

The pies and slices which make up the full range have been hand finished by bakers.

Wilf Lewis, Managing Director of Lewis Pie and Pasty Company, said: “We are obviously really pleased to have our pies recognised at the biggest awards event for our industry in UK. To have two products from our new Wilfreds range win awards is testament to the innovation of the range and the high quality ingredients that have gone into the products.”

“The Wilfreds range has already been well received since its launch during British Pie Week, with food bloggers and journalists creating a lot of traction and positive awareness as a result of tasting the products themselves, which we have been delighted with.”

“We are committed to taking a proactive approach to researching the food market and exploring new business avenues to ensure we are always able to provide something new and relevant to what customers and suppliers want.”